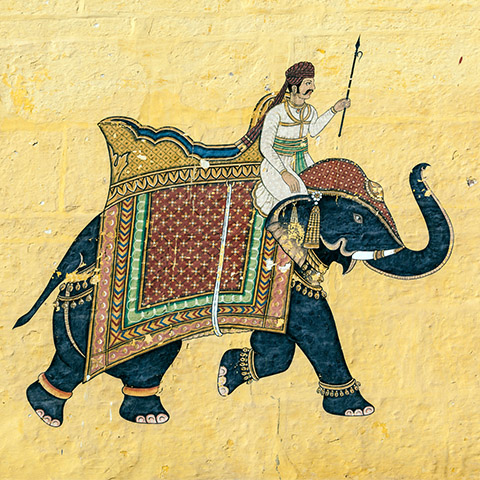 Nathdwara is famous for its Krishna temple which is home to Shrinathji, a 12th century idol of Krishna and the temple’s namesake. Originally situated on Govardhan hill, near Mathura, it was moved to Nathdwara in the 17th century to protect it from the Mughal emperor Aurangzeb’s campaign against Hindu worship in his empire.

The temple now attracts thousands of fervent devotees from all over India and the world. To get the most out of the trip we would advise that you visit with a guide from the hotel, to navigate the crowds and explain the reasons behind the traditional offerings being given. Men and women are separated during the induction to the temple but can rejoin once inside so you may need one guide for men and another for women.

The experience is at times confusing and very crowded but will provide you with an invaluable insight into the depth and meaning of the Gods and Goddesses, in this case Krishna, to Hindus worldwide.

Darshan and other details

Darshan (prayer) Timings: Inductions into the temple occur at eight different times during the day. Devotees attend these in correspondence with aspects of Lord Krishna’s day as is explained below. As a tourist, Rajbhog (breakfast) is the best induction to attend, being a slightly less popular time of worship. If you want to visit a Hindu temple, but are taking a child or are not fond of crowds, Eklingji is a quieter option.

Reservations: +91 82399 26000 .  stay@raashotels.com
For any wellness related query, please mail us on wellness@raasdevigarh.com